How to capture merchanting transactions outside the compiling economy

How to capture merchanting transactions outside the compiling economy

14.101.        An important challenge with respect to collecting statistics on merchanting relates to the exact formulation of survey questions and instructions, especially with respect to questions related to the identification of the ownership of the goods. The following provides national examples of approaches used by countries: 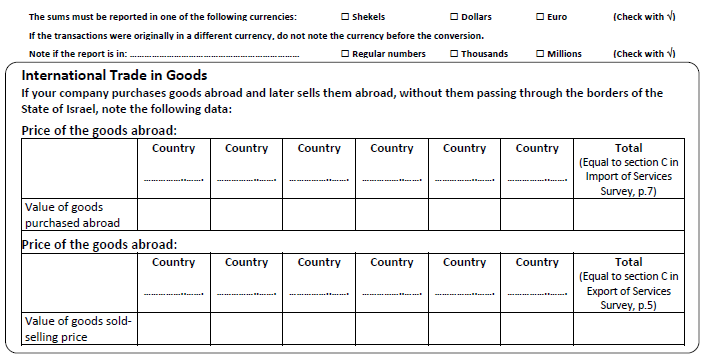 Merchanting is defined as the purchase of goods by a Swedish party from a foreign party and the subsequent resale of the goods to another foreign party, where the goods do not cross the Swedish border. The gross value of the goods sold to foreign buyers during the period is reported as income here. The total purchasing costs for merchanting goods purchased during the period regardless of whether they have been resold or not are reported as cost.

123 Merchanting - Purchase cost for merchanting goods sold during the quarter.

The costs for goods that were reported as income under SCB code 122 (regardless of time of purchase) are reported here. Only the initial purchase amount of the good is reported as the cost. Any manufacturing services, freight charges or other related services are to be reported under the respective service type.

14.103.        In the United States, the Bureau of Economic (BEA) collects information on merchanting in its Quarterly Survey of Transactions in Selected Services and Intellectual Property with Foreign Persons (BE-125[1]). Instructions to respondents are as follows:

Merchanting services (Receipts only) – Receipts for merchanting services are equal to the difference between your cost and the resale price of goods (such as crude oil, grain, and other commodities) that are both purchased and resold abroad; that is, the goods are neither imported to, nor exported from, the United States and they do not undergo significant processing during the time between when they are purchased and resold. Without regard to whether you initially purchased the goods from an affiliated or unaffiliated foreign person, report data for those transactions according to the company’s relationship with the foreign entity (foreign affiliate, foreign parent(s) and foreign affiliates of foreign parent(s) group(s), or unaffiliated foreign person) to which the goods were resold.

14.104.        The questions below (9 and 10) were put into the field with reporting for the third quarter of 2016. BEA will analyse the results and determine if it possible to publish them as the standard BPM6 components “Goods acquired under merchanting” and “Goods sold under merchanting”.

14.105.        The second part of the questionnaire (below) is included to make it clear to respondents that goods sold under merchanting less goods purchased under merchanting should be equal to the net merchanting receipts reported. Experience from the previous benchmark survey revealed that it was necessary to make this clarification when following up with several survey respondents who had reported incorrectly.

14.106.        The BEA collected additional detail on merchanting in its 2011 Benchmark Survey of Transactions in Selected Services and Intellectual Property with Foreign Persons, BE-120. The additional detail covered the gross value of sales and purchases of the underlying goods. The BEA included these questions on gross sales and purchases to determine whether it would be feasible for companies to report this information as the standard BPM6 components “Goods acquired under merchanting” and “Goods sold under merchanting.” BEA has determined that it was feasible for companies to report this information. 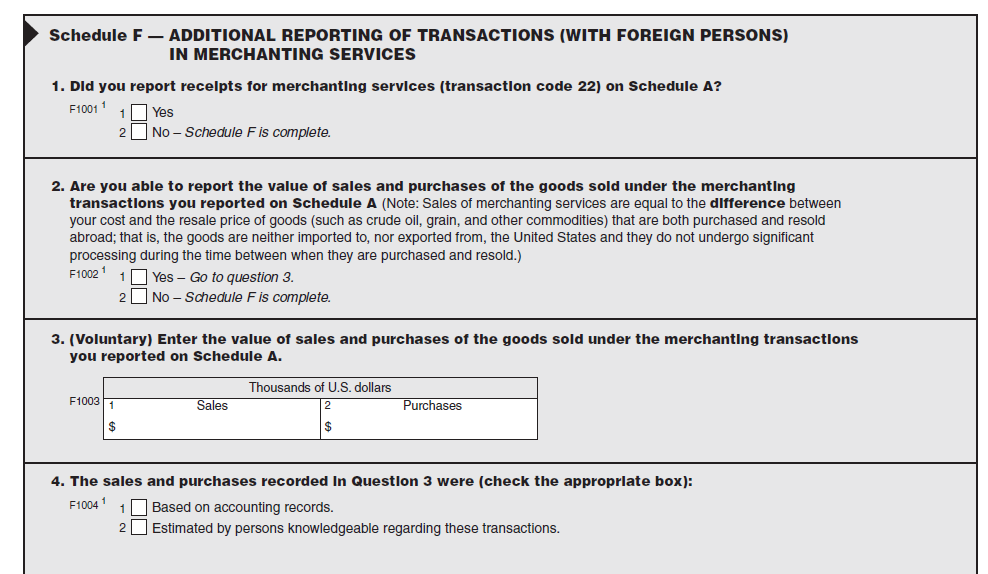 It includes the purchase and the resale of goods (merchandises or raw materials) from and to a non-resident without the crossing of the French border. Goods are purchased in the aim of selling them making a profit.

It also includes intra-group exchange of goods (between parent companies and affiliates or between affiliates) taking part in industrial activity (spare parts, semi-finished products) which are not submitted to customs and tax procedures. These transactions do not imply making a benefit.

Operations carried out on the futures markets are excluded. Brokerage commission fees which have to be reported separately from transactions of goods are also excluded and reported trade-related services.

Transactions related to the foreign purchase of goods used on building sites and their potential resale are reported in “construction services“.

Respondents report in the column “expenditure” the negative exportation of the merchanting operation which represents the purchase of goods abroad. In the column “receipt”, the amount of the selling of goods to a non-resident is reported including the profit (if any).

Back to B.1.3.Addressing compilation challenges