14.273.        Insurance services include three components: (a) premiums less normal losses, called “risk-pooling services”, (b) premium supplements and (c) auxiliary insurance. The calculation of risk-pooling services requires information on current premiums and a measure of what insurers expect their claims to be. Premiums are collected on BEA surveys as outlined above. The proxy measure for insurers’ expected claims, called normal losses, is estimated by applying a ratio based on historical premiums and claims to current period premiums. That method assumes that insurance enterprises base current premiums on their expectation of current period losses and that they base their expectation of losses on their loss history.

14.277.      Normal losses are the sum of expected regularly occurring and catastrophic losses. Separate estimates of normal losses are calculated for primary insurance, reinsurance and credits and debits. For the United States, the ratio of losses to premiums is lower for primary insurance than for reinsurance because administrative and financial intermediation services differ for those two types of insurance. Primary insurance is more retail-oriented, with a large number of individual policies sold and written, and, thus, may have higher administrative and other costs than reinsurance, which involves fewer, larger transactions between insurance enterprises.

14.278.        BEA does not directly collect information on the technical reserves of insurance enterprises on its surveys because such collection is deemed too burdensome for enterprises. Due to the lack of data on technical reserves, it is not possible for BEA to use a relationship between investment returns and technical reserves to estimate premium supplements. As a result, BEA developed a ratio of expected investment gains to premiums, and multiplies that ratio by current premiums to estimate premium supplements. The ratio of investment income to premiums is from Best’s Aggregates and Averages: Property-Casualty by A.M. Best Company. A.M. Best provides data on investment gains that are attributable to insurance transactions, as opposed to investment gains attributable to the insurers’ own funds. The ratio is a weighted moving average of the previous ratios of actual investment gains to premiums.  In the cross-border trade data, the expected investment gains-to-premiums ratio is estimated separately for primary insurance and reinsurance, in recognition of the fact that reinsurers may have different ratios of net gains to premiums than primary insurers. The different ratios may arise because reinsurers hold larger reserves than primary insurers, or because reinsurers hold reserves for a longer period of time.

14.279.        Once those ratios have been calculated, they are applied to the estimates of premium receipts for direct insurance and reinsurance obtained from BEA surveys to derive premium supplement receipts. Because similar data on the investment income of foreign insurance enterprises are not available for payments, the ratio used for receipts is applied to the estimates of premium payments in order to estimate premium supplement payments. 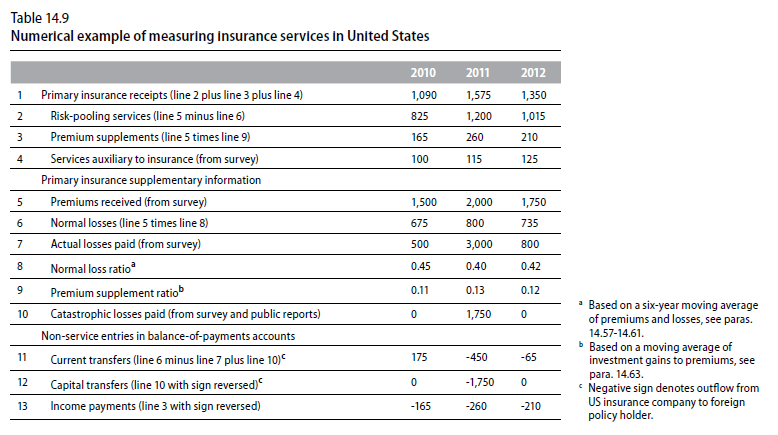 Back to B.4. Insurance, pension and financial services