14.281.        Since Japan employs an ITRS as a major data source, recording insurance services on an accrual basis has been challenging. To deal with the problem, Bank of Japan (BOJ) adjusts ITRS data in implementing a method that most closely conforms to that outlined in example 3 in MSITS 2010, box III.7. The method measures insurance services by multiplying actual premiums earned by the insurance service ratio.

14.282.        The ITRS captures premiums actually paid rather than actual premiums earned that accrue to the accounting period. Thus, data are adjusted under the following assumption: BOJ assumes that insurance premiums payable cover 12 months’ risks and, as insurance premiums are generally paid at the inception of a policy, actual premiums earned are calculated by equally allocating premiums in the subsequent 12 months (figure 14.3). That adjustment is made for other direct insurance and reinsurance.[1] 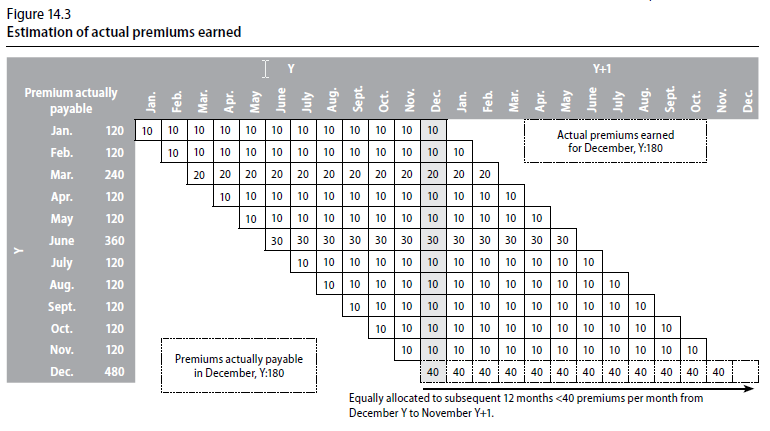 14.284.        Insurance services are calculated by multiplying the service ratio by monthly actual premiums earned.[2] Premium supplements are regarded as zero, since retained incomes for non-life insurance reserves are negligible. Claims are recorded when paid, under secondary income for normal claims and under capital transfer for high claims, when catastrophic events have occurred.

14.285.        That method is likely to stabilize outputs. Compared with a simple cash-based method, which calculates     premiums minus claims, the volatility of the outputs is substantially reduced. More importantly, negative figures, which are due mainly to lumped claims, are avoided.

Back to B.4. Insurance, pension and financial services