3.26.        Example from the United States of America: obtaining information on goods transactions through postal and courier services. In the United States international merchandise trade statistics program, value-based exemption levels have been established to help alleviate filer burden and reduce processing costs. As goods valued below these exemption levels do not require complete filing, import and export low-value estimates are calculated each month.  Goods shipped by small package courier companies have been identified as a major component of under-coverage, especially for exports. Therefore, the United States Census Bureau developed a methodology for using a sum of courier and non-courier estimates. Data on low-value shipments provided by major courier companies upon request served as a basis for the methodology.   The proportion of low-value trade to high-value trade was developed using data from the couriers over several months, and this proportion is used as a “courier factor”.  The courier data received each month is multiplied by this factor to produce courier low-value estimates.  The courier factors can be updated as needed by requesting more recent low-valued trade data from the courier companies.

3.27.        Example from Mexico: administrative and company records as non-customs sources. In principle, administrative and company records can be used to validate, supplement or replace the information provided by customs. In the case of Mexico, such non-customs records are used for two specific cases. In the first case, the Ministry of Communications and Transportation provides information on the volume of goods transported by air, sea, road and rail obtained from national and international airlines as well as from public bodies such the maritime ports. This information is used to supplement the information on mode of transport available from customs declarations. Second, in the case of oil,Mexico’s Working Group on Foreign Trade Statistics agrees on the replacement of the customs records and the use of internal records from Petroleos Mexicanos, the company responsible in Mexico for producing and exporting oil.

3.28.         Example from Norway:  use of ships registers. In Norway, the external trade of ships, aircrafts and movable drilling rigs is not properly covered by data from customs. Concerning ships, estimates based on change of ownership are used as an alternative. Statistics Norway regularly receives information from the Norway’s shipping registers (NIS/NOR) about new registrations, cancellations and other changes in the registers. Based on this information, a letter and a form are sent to the registered owner, asking for additional information. The full details of this example is provided in chapter XXIII, annex B.

One of the objectives in the fifth revision of the Broad Economic Categories classification is to summarize trade by broad economic categories and by the end-use of the products.

Determining the end-use for economically important (or less) products is not so trivial for the majority of the goods. Let's take for example not roasted coffee grains. It could be assumed that the only use is as an input (intermediate consumption) for instant coffee production. In some cultures not roasted coffee is bought by households and roasted by households itself, in this case the end-use of "coffee grains not roasted" should be classified as private consumption. The example above shows that there are not goods that have one end-use only.

As it is recommended the Foreign Trade Sector at the Israel's Central Bureau of Statistics (ICBS) has conducted this kind of survey since 1965. It classifies the imports of commodities by use: for consumption (by households, non-profit institutions or the government), as production inputs and for capital formation – classified by the economic industries of the importers. The resulting classification is used as the basis for the yearly and monthly imports of commodities time series published regularly by the Central Bureau of Statistics. In addition, the results of the Import Destinations Survey are used in the preparation of input-output tables and in the preparation of several of the national accounts time series published regularly.

Import Destination Survey. The survey is conducted to create a better understanding of the uses of commodities imported to Israel. The information, which his collected from importers and administrative sources, served as basis for the classification of the imported commodities by economic activity/industry. It includes the "industry of destination" (economic activity in which the imported commodities were used). The results of the survey are used as the basis for the classification of the yearly and monthly imports of commodities and national accounts time series published by the Central Bureau of Statistics. In addition, the results of the Import Destinations Survey are used in the preparation of input-output tables which are published by the Bureau.

The estimates are based on data collected using three different processes. Direct importers that are surveyed using an abbreviated questionnaire attached to the questionnaire of the Survey of Products and Materials in Manufacturing.

Commodities imported by indirect importers (those that were not included in the population of the Products and Materials in Manufacturing survey) were surveyed using a dedicated sample.

The third process comprises the investigation of commodities using data received from the Israel's Customs Office coupled with data from other administrative sources. This process includes, for example, classification of cars (private consumption or investment) based on matching the Car Register from the Ministry of Transport, the Business Register and Customs data. Other commodity groups as car parts, fuels and medicaments, were investigated under this category.

As stated, the importers list was divided in two main groups: direct and indirect importers

1.  Direct importers – Are those who import commodities as inputs for production or for capital formation. The industry of destination of the commodities imported by direct importers, who, as mentioned, are manufacturers, was determined by the industry of the importer-manufacturer, according to the classification in the Business Register of the Central Bureau of Statistics.

These importers were divided into two sub-categories:

b)      Importers which function as "direct importers" and "indirect importers" as well. For example a pasta factory that not only produce pasta but also import ready pasta and sell it with no other processing.

2.  Indirect importers – Includes importers who engage in trade. Determining the industry of destination of the importer of goods in this framework was done through questionnaires and a direct approach via telephone, fax and, in some cases, a personal interview with the importers. These importers were asked who the customers who purchased the commodities were. Each importer was presented with a list of the commodities which he imported during the survey year.

In the survey questionnaire, the unit of investigation (commodity) was presented in a consolidated form, after the value of all entry forms from an importer containing a specific commodity was summed up, even if the commodity was imported at different times during the relevant year.

The sampling population of indirect importers included all the indirect active importers.

All commodities investigated using administrative sources are excluded from the sampling population. The sampling unit is the importer and every importer provided data regarding all the commodities imported by him. The final sample of the survey was comprised of X importers sampled using the probability proportional to size (PPS) sampling technique. The size for every importer was calculated based on the total value of imports of the different commodities (representing the importance of the commodity), the value of each commodity imported by each importer and the representation of the commodities in the Products and Materials in manufacturing survey.

A final file resumes the proportion of each item and the correspondence between HS, BEC, CPC, SITC and other classifications.

Surveys should clarify the proportions of imported goods used for intermediate or final consumption, or fixed capital formation as the Israeli experience shows.

Annex III.A Country practices in the use of different data sources 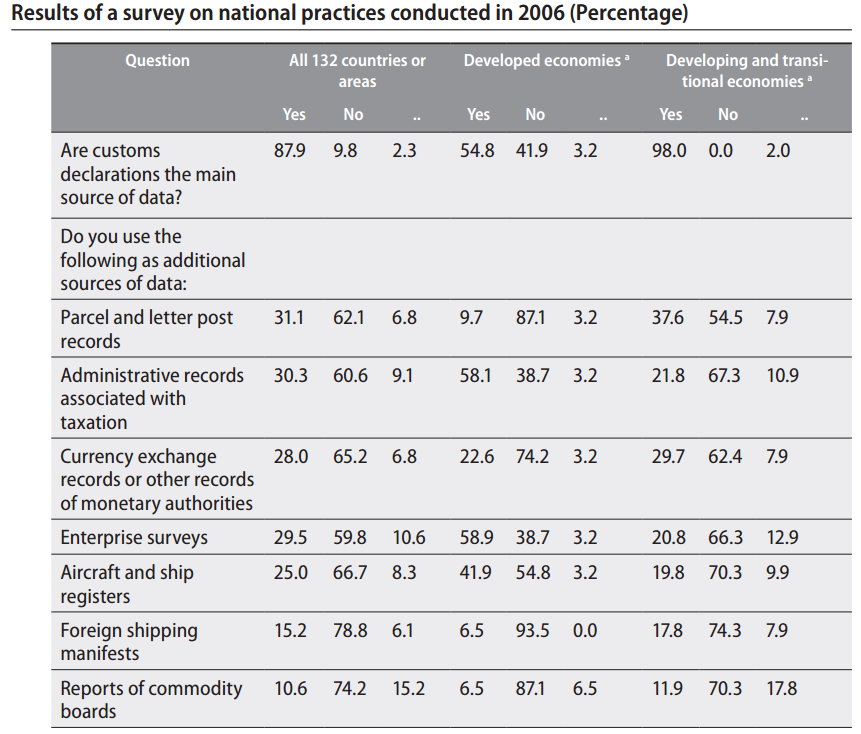 a. There is no established convention for the designation of countries or areas in the United Nations system “as developed” or “developing”. In common practice, Japan in Asia, Canada and the United States of America in Northern America, Australia and New Zealand in Oceania, and Europe are considered developed regions (see http://mdgs.un.org/unsd/mdg/Host.aspx?Content=Data/RegionalGroupings.htm).