14.242.        Construction covers the creation, management, renovation, repair or extension of fixed assets in the form of buildings, land improvements of an engineering nature and such other constructions as roads, bridges and dams. It includes related installation and assembly work, site preparation and general construction, as well as specialized services such as painting, plumbing and demolition (see MSITS 2010, paras. 3.132-3.135).

14.244.        With respect to the value of the goods and services used as inputs to the work, compilation difficulties may arise when it is not possible to identify separately the goods purchased in the home economy and the host economy. For practical reasons, the compiler may need to estimate a breakdown, or otherwise attribute all goods purchased to either the host or the home economy of the construction enterprise (see also box 14.2). Also, it may not always be possible to identify the purchase of goods and services separately from labour costs. In that case, the compiler will need to estimate a breakdown or, alternatively, allocate all costs either as goods and services or as compensation of employees (for employees that are residents of the host economy).

14.246.        In the case of long-term projects where no local entity needs to be created, MSITS 2010 and BPM6 suggest a number of factors to identify if a unit of one economy, which is active in another, has operations substantial enough to consider that the unit has a branch resident in that other economy (see MSITS 2010, para. 3.142). The operations, therefore, need to be analysed to identify if they are substantial. In particular, compilers should avoid creating too many notional units.

14.247.        First of all, the compiler should identify the duration of the construction project. If the project extends over a period of at least one year, it is a strong indication that the compiler should investigate the project further. If certain other factors are met, the construction work undertaken is to be treated as if a separate institutional unit­—a branch (subsidiary)—has been  created that is resident in the economy in which the activity is being carried out. That branch would be considered a direct investment enterprise. If some or all of those factors are not met, the activity is to be treated as an export by the construction enterprise. The other suggested criteria are the following:

(a) The maintenance of a complete and separate set of accounts for the activity (i.e., income statement, balance sheet, transactions with the parent company, etc.);

(b) The activity being subject to tax in the host country;

(c) The existence of a substantial physical presence;

(d) The receipt of funds for its work for its own account, etc.

14.248.        The decision is based on the weight of the evidence for a set of criteria and not on any single criterion; for example, it would be very difficult to identify a branch if, for the construction activity, a separate set of accounts cannot be prepared or maintained. Construction activities involving major projects (bridges, dams, power stations, etc.) that are carried out through unincorporated site offices, in many cases meet the criteria of a direct investment enterprise and thus are treated as part of the production of the host economy, not as an export of services to that economy.[3]

14.249.        In the case of construction projects conducted in the context of aid programmes, the treatment should be to record a transaction under services if relevant (i.e., if the project is small scale, using the criteria defined in the previous paragraphs) between the economy in which the aid agency financing the project is located (credits) and the economy in which the construction is taking place (debits). The counterpart entry should be in the capital account. If the contractor is not a resident of the economy of the donor, then there would also be some (construction) transactions to record between the economy of the donor and the economy from which the contractor is conducting its operations (using a gross recording).[4] 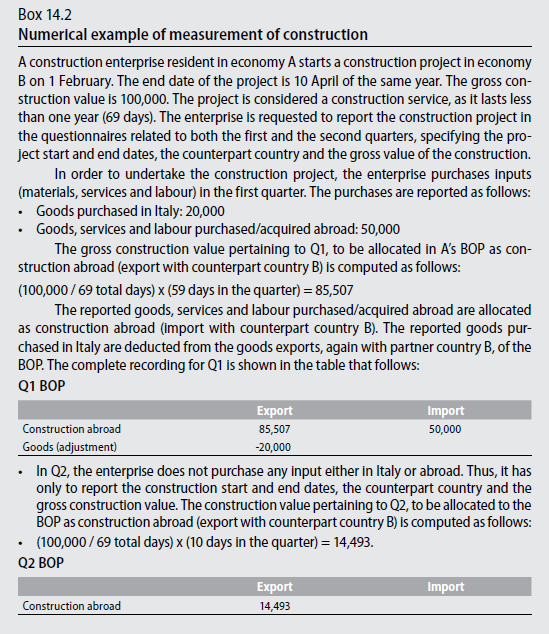 Next: B.4. Insurance, pension and financial services

[4] Such treatment is not limited to construction.